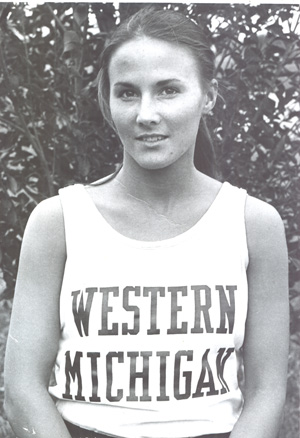 Susan (McDonald) Monaghan has the distinction of being the first outstanding girls distance runner in the county, having owned records at Ludington High in the 880-yard, mile, and two-mile races. No one has surpassed her two-mile mark. She was the state runner-up in 1978 with a time of 11 minutes, 7.7 seconds and placed sixth in the mile. She pioneered the Orioles' cross country program, and did it with style, winning the Fennville Invitational against a field of 96 runners. That was the first major competition and her running landed her a great career at Western Michigan University both in track and cross country, where she continued to set school records. The running has not left her, as she is a Lakestride Half-Marathon winner and also participated in basketball at Ludington High School.