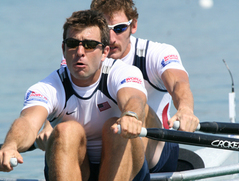 Matt Hughes has the distinction of being Ludington's sole Olympian, having competed in the 2008 Summer Games in Beijing, China in rowing. He finished fifth in the men's quadruple sculls in the Olympics, after earlier winning the world championship in Lucerne, Switzerland. Not only an excellent rower, Hughes was the goalkeeper for Ludington's 1998 and 1999 soccer teams that went a combined 43-4-4 with just one loss and one tie in 1998. The Orioles won league, district and regional titles.