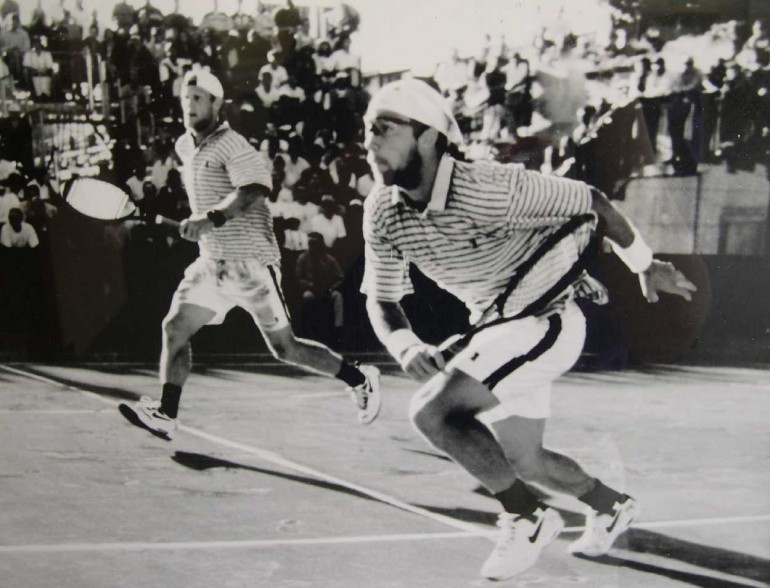 Growing up in Ludington, Luke went with his mother, Patricia, to East Grand Rapids, where he became a state champion tennis player during his high school years. He attended the University of Southern California and was an All-American in singles and doubles. During his playing career he was known as "Dual Hand Luke" for his ability to serve with either hand. Known for his competitiveness and toughness, in the first set of a 1989 match he tore a ligament and broke a bone in his right thumb and switched to his left, losing a close three-setter. He finished his pro career with 15 doubles championships. His biggest win came in 1993, when he teamed with his brother, Murphy, to win the French Open doubles title. The brothers reached the finals in six other tournaments that year and ended the year fifth in team doubles rankings. As a singles player, he defeated Andre Agassi 6-2, 6-4 at the Kroger St. Jude Tournament in Memphis, Tennessee in 1996. As a young man in Ludington, Luke was a national finalist in Punt, Pass and Kick under the tutelage of his football-playing father, Howard. Luke is now a color commentator for ESPN, specializing in tennis. At 6 foot 6 inches tall, Murphy Jensen possessed one of the hardest serves in professional tennis. Like his older brother, Luke, Murphy was a state champion singles player in high school and went on to earn All American honors at the University of Georgia in 1990. He also attended Southern California for two years before transferring. Murphy won 10 national junior doubles titles with Al Parker, including a pair of victories at the Orange Bowl in 1985 and 1987. He turned professional in 1991 and advanced his world doubles ranking from 276 to 136. Murphy's breakthrough year in tennis was 1993, when he teamed with Luke to win the French Open Doubles Championship. The Jensen brothers finished fifth in team doubles rankings and 17th individually. In 1994, the brothers also reached the quarterfinal round in the U.S. Open and the French Open. They were quarterfinalists again in 1995 at the French Open and semifinalists in the U.S. Open where they defeated the team of Connoll and Galbraith, then the top doubles team in the world. Murphy's hobbies now include fishing, chess and sky-diving. He is an actor and the left-handed lead guitarist in his band "We've Never Heard of You Either".