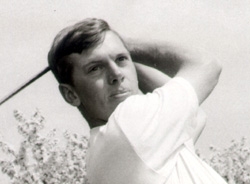 Lee Edmundson, as a high school sophomore in 1964, shot an 80 in the Class B state golf tournament, helping Ludington High to a share of second place, three strokes behind co-champions Kalamazoo University High and Whitehall. In his junior year, the Orioles finished ninth as a team but Edmundson was co-medalist in the state meet with a 77. As a senior in 1966, Ludington was fifth and Edmundson shot a 76 for medalist honors again, three strokes ahead of his nearest competitor. Edmundson went on to play at Michigan State, where he helped the Spartans capture their first Big Ten championship in 1969. He earned All-Big Ten honors in 1970. He also placed 11th in the NCAA championships in 1969 and tied for 17th in 1970, earning honorable mention All-American honors. Additionally, he was the men's champion at Lincoln Hills five times.