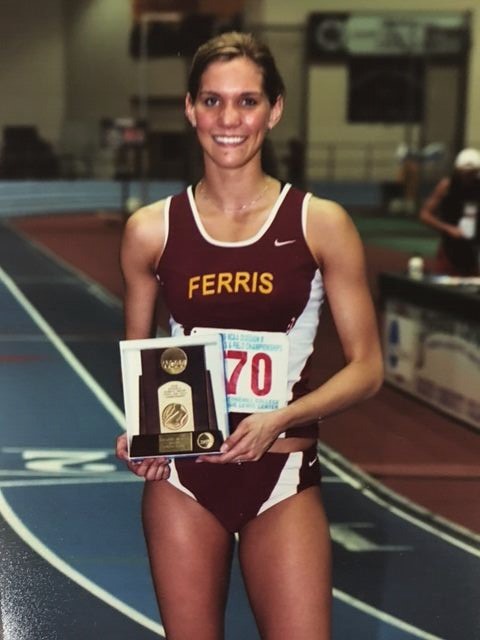 Leanna (Wolf) Geers shined brightly on the track and the cross country courses for Mason County Central and Ferris State University. Geers graduated from MCC in 2002 and owned four school records (400-meter, 800, 3,200 relay and 1,600 relay) with multiple West Michigan Conference championships in the 400 and 800 runs with the 1,600 and 3,200 relays. She was awarded the female Senior Sportsmanship Award at the school. She qualified for the state track meet all four years and won state titles in the 3,200-meter relay, once in 1999 with a new record in Class C and the other time in 2001. She and her teammates were the state runner-up in 2000. She was a part of the MHSAA Class C state runner-up team in 1999, and she was a state runner-up three times with her teammates in 1,600-meter relay in 1999, 2000 and 2001. She placed fourth in the 800-meter run in the 1999, 2000 and 2001 state meets. In cross country, Geers was an All-Stater with a seventh place finish in her senior year. She went on to become an All-American in 2006 at Ferris State as she finished third in the 800 both indoors and outdoors. She also still owns a share of the 3,200-meter relay school record at Ferris State as a part of a standout four-year athletic and academic career there. She and her teammates also set an indoor Ferris State track record in the distance medley relay. It was that distance medley relay that finished eighth in 2005 and 2006 at the NCAA Division II indoor national finals, earning All-American honors both years. After her college career, Geers pushed herself beyond the distance events to marathon running. She ran her first marathon on March 16, 2008, and her time was good enough to qualify for participation in the Boston Marathon.