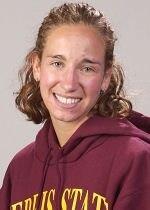 Jenny (Irwin) Every set several Ferris State University track records after an outstanding high school career at Mason County Central. At MCC, she qualified for the state meet four times running in the 800-meter and 1,600 as well as the 1,600 and 3,200 relays. Irwin set six Ferris State records and made appearances three consecutive years at the NCAA Division II meet, was named the 2006 GLIAC Most Valuable Runner, won All-American honors twice in 2006 and was a finalist for NCAA Woman of the Year.