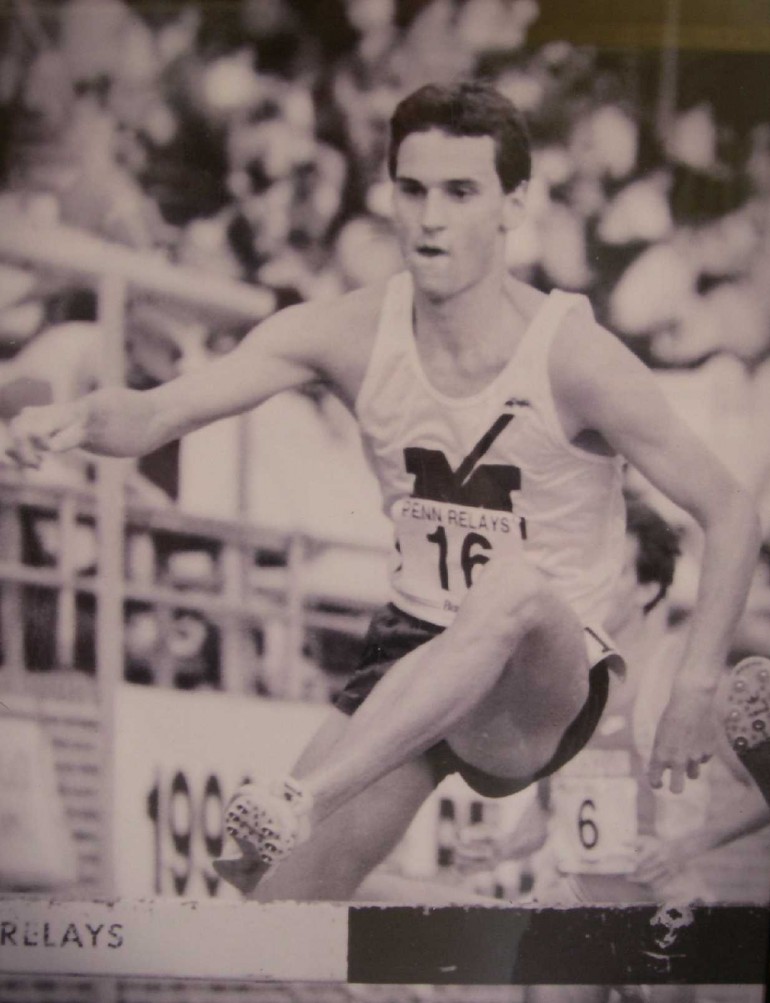 Jeff Barnett was the first area athlete to earn All-State honors in three sports: basketball, cross country and track. His performance in the 1986 Class C State Track and Field Finals at Bangor has never been equaled, let alone surpassed. On an unseasonably warm day, Barnett won the 800-, 1,600- and 3,200-meter races and was the anchorman on the winning 3,200-meter relay team for Mason County Central. Jeff helped M.C.C. win the state title that day, edging perennial power Detroit St. Martin de Porres, 46 points to 44. His times that day were 1 minute, 54.6 seconds in the 800, 4:18:6 in the 1,600, and 9:40:13 in the 3,200. "I've seen people win four events here before," Benzie Central coach Pete Moss said of Barnett's performance that day. "You have a person win a 100-yard dash and 200 and a couple of sprint relays, but when you anchor the two-mile relay and then win the two-mile, mile and half-mile... my gosh, that's Superman as far as I'm concerned." He also won state titles in the 800 and 1,600 as a junior and twice finished second in the Class C state cross country finals. As a senior member of Central's basketball team, he averaged a team-high 16 points and set a school record for steals, leading the team to 21 victories. Former Shelby basketball coach Jim Tate called the 6 foot 1 inch Barnett the most dominant athlete he had seen in his 11-year association with the West Michigan Conference. Barnett attended the University of Michigan where he earned 12 letters in track and cross country. In cross country he was the number three runner his junior and senior years, helping the Wolverines to a seventh-place finish his senior year. He had personal best times of 4:05 in the mile, 1:50 in the half-mile and 8:41 in his best event, the 3,000 meter steeplechase. Said Muskegon Oakridge's long-time track and field coach John Swinburne, "I would say he's the most versatile, talented kid in track that I've seen."