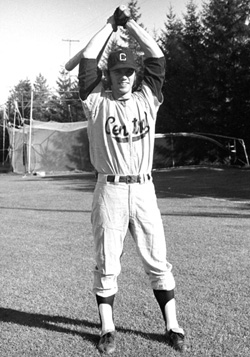 Ed Papes was a three-sport star for Free Soil High School, graduating in 1967. In track and field, he held the school record in the 100-yard dash (10.4 seconds) and also helped set school records in the 880- and mile relays. As a basketball player, Papes was a key member on Pirate teams that advanced to the Class D state semifinals in 1966 and 1967. He led the latter squad in scoring at 18.2 points per game. Papes also excelled in baseball and went on to play at Central Michigan University. During his three years on the varsity from 1969 to 1971, CMU was 27-10, 36-4, and 35-7, qualifying for the NCAA tournament in his final year. Papes ranked among Central's career leaders in many offensive categories and is still ninth in career stolen bases with 60. His 44 walks led the team in 1971. Papes later was an outstanding fast-pitch softball player in Mason County.