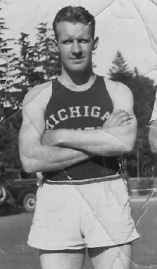 Charles Dennis was a two-time state mile champion for Ludington High in 1931 and 1932. In both years, his coach, Mitch Read, entered him in the University of Chicago National Interscholastic Track and Field Championships, which drew elite athletes from all over the United States. Dennis was fifth in the mile in 1931 and second in 1932. He attended Michigan State College where he lettered in track for three years and in cross country for one year. He captained the Spartan's Track Team in 1936.