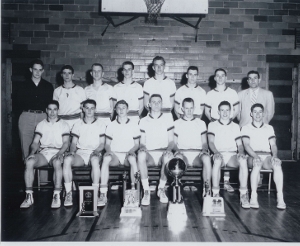 The team that launched the Golden Age of Basketball in Mason County, the 1953 Ludington Orioles won 21 games and lost two and is still the only LHS squad to advance to the state finals. Coached by Joe Kowatch, who was then in his first year at Ludington, the team won the North Central championship as well as Class B district and regional titles. The team won its first four games of the season before falling to North Central opponent Mt. Pleasant, 56-50. It then closed out the regular season with 11 straight victories, including a 59-50 win over Mt. Pleasant. Ludington won all of its tournament games through the quarterfinals by double-digit margins. In the district, the Orioles downed Fremont, 56-42, and Hart, 65-39. In the regional, they topped Petosky, 64-52, and Manistee 55-40. They defeated Manistique in the state quarterfinal, 60-49, and Grand Blanc in the semifinal, 55-37. In the state finals, the Orioles were defeated by St. Joseph, 60-51. The team played its games in Oriole Hall at Ludington High School on East Foster Street. That school is now Foster Elementary. The top two scorers on the team were Pete Tillotson at 18.9 points and Lee Schoenherr at 13.1 points per game. In the seven tournament games, Tillotson averaged 20.7 and Schoenherr 15.1 points per game and held opponents to 41.1. Team members in alphabetical order were Jim Anderson, Jim Bateson, Tom Coleman, Ronald "Kay" Ferris, Terry Ferris, Jack Heglund, Tom Johnson, John Jorgenson, Richard Kowatch, Richard Newberg, Ron Rake, Tom Runkel, Lee Schoenherr, and Pete Tillotson. Managers were Charlie Nelson and Al Palm. The team was coached by Joe Kowatch. Coach Kowatch and Tillotson are members of the Mason County Sports Hall of Fame.